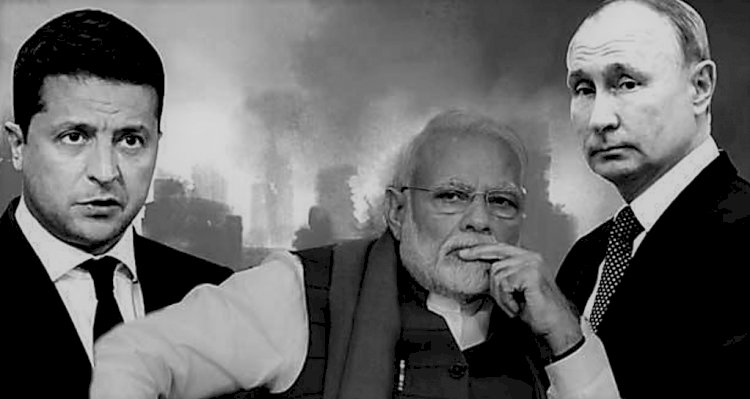 Russia – Ukraine crisis Has changed all patterns of world geopolitics. The Russian infiltration and aggression are at their height. Now Russia is about to capture the whole of Ukraine. No one can exactly assume what could happen in next coming days.

The movement of the world again divided it into two parts, within this division small countries in Europe are in dilemma. They are in the state of analysis that what should be their next policy to protect their own country.

A country like India which has earned numerous support from the world within the pandemic period is also in the state of Analysis.  India cannot support directly any one of them either Ukraine or Russia. If India will support Ukraine it would seem like India is directly supporting or taking the side of America and NATO.  That it never supported this Military alliance NATO- North Atlantic treaty organization from the beginning of its Independence. The other reason for not supporting Ukraine directly is – Russia is our tested friend which helped us in every war crisis after Independence.

Even India had given the sovereign legitimacy of Ukraine – after the reffferandom of December 1, 1991, when the population of Ukraine voted overwhelmingly for independence, any of the Indian higher authority like prime minister or president never visited Ukraine.

On the other hand, Indo-Russia relations have a long history. Nehru era was inclined towards the soviet pole within the period of the cold war. after 1955 even if India was adopted a nonalignment policy to avoid the pressure of the cold war and western influence. Russia had directly supported and given military support during the period of the indo- Pakistan wars that were held in 1948 and 1971.

In the current situation, India has a huge dependency on Russian military supplies, approximately 60 to 70 % is still there. Imagine a situation where a large number of fighters, tanks, and air defense systems are present but not available for operations due to a lack of spares and parts. And if any upcoming war situation with China and Pakistan, this will expose big a security vulnerability. This dependency seemed much stronger when India had signed a $ 5 billion deal with Russia in October 2018 to buy five units of the S-400 systems despite the warning from the Trump administration. As the S-400 is Russia’s most advanced long-range surface to the air missile system. This defense system had been seen during a training exercise at a military base in the Kaliningrad region, Russia on August 11, 2020. Now it is big tension for India that the sanctions implemented by the west will affect Russia’s domestic defense industry that could impact the deal.

Another aspect for India is well known that it has border issues with China in Arunachal Pradesh and Ladakh and China is trying to capture our territories for a long time. In the Russian– Ukraine crisis China openly supported Russia against the western world. And also declared economical support to Russia against the sanctions implemented by NATO countries. In the present situation, if India will criticize the Russian invasion, China would get a chance to provoke Russia against India and that will not be good for Indian national interest.

That’s why India abstained from a procedural vote taken in the United Nations security council UNSC to call for the rare special emergency session of the UN general assembly on Russia’s aggression against Ukraine.

US and NATO counties are continuously asking India that it should take a clear-cut decision about the conflict and take one side. But it is not possible for India and it would neither take the side of NATO and the western world nor take the Russian side because of its national interest.  India has bilateral relations with all these counties that are directly or indirectly involved in this conflict. Along with Russia India has military deals with the US, France too and is somehow dependent on these countries.

Russian invasion is not justified at any cost, due to this a whole country is about to destroy, millions of people are affected, killed, and migrated from their land.

The Government of India cannot take risks for more than 100 million civilians of India by taking any side.

How the ‘tariff war’ converted into an ‘unarmed combat’- the emergence story of...